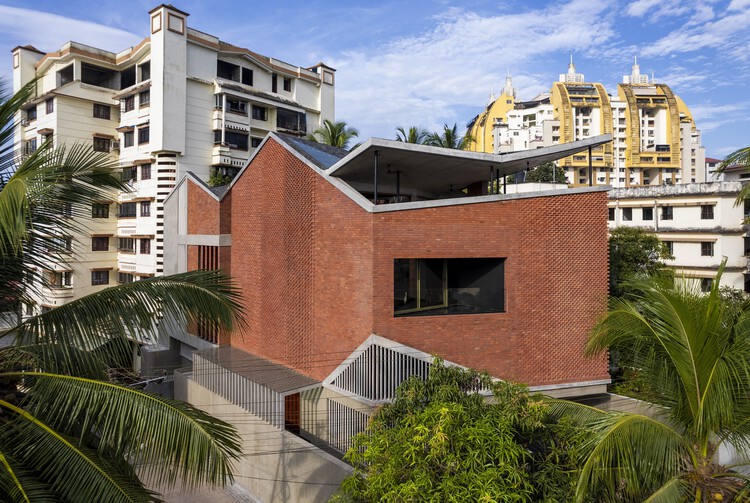 Text description provided by the architects. The Brick House is located in the coastal town of Mangalore, in the south Karnataka region. A melting pot of many cultures coming together, the city is well-known for its inimitable landscape and dotted heritage lingering in the old parts of the town.  The site is in a dense urban sprawl in that area. Having moved to Saudi, the client’s aspiration was to have a family home close to his ancestral roots. The design brief for the house had stories from his formative years walking past the old brick factories with chimneys poking above the coconut trees. And those of red-oxide flooring and lime plaster-finished walls which keep the house refreshingly cool.  To put it together, this family house should evoke memories of the past while keeping the design unique and aesthetically modern. Mangalore features a tropical climate with heavy to moderate rainfall most of the year and hot summer days. Passive design strategies and planning principles were involved to ensure uninterrupted cross-ventilation.

After leaving the necessary setbacks on the Corner Plot, the house was designed in several layers. With the bottom two levels planned as Semi-Private, the upper levels become Private and independent. These layers are then further intersected by courts planned at various levels. The sloped topography of the abutting road helped one enter the house at two different levels. The Lower ground had parked along with an Entertainment den aka “Majalis”, whereas the upper level became the main entry with the formal living & dining areas. The entry opens under a triple-height skylight ascending from the land and opening into the sky.

Deriving some of its qualities from a “Thotti Mane” (Courtyard House) the varied courts are intercepted in multiple levels and volumes. With an inward-looking plan, the courts responded to the qualities of the sky, the light filtering through the brick screens or even allowing a soft breeze to pass through. Staggering of courts also allowed all the users to either enjoy an extended court outside the private areas or open into it. The building skin is constructed in several layers akin to the composition of earth keeping the inner layers cool and insulted. All the rooms have triple-layered walls, and laterite masonry is sandwiched between brick jail from the outside and thinks brick sections from the inside. The façade is laid with bricks arranged in a pattern creating an expression of its own while helping reduce the building scale. The characteristics of traditional tiled sloping roofs were interpreted in these brick arrangements which made it look like the building is in motion as one walked by.

The design philosophies are carried ahead in the interiors by using natural materials.  Black Limestone & Grey Tandur formed the canvas for the plaster-finished walls. The experience of movement and celebration of craftsmanship was explored with multiple plaster finishes done in situ with the site contractors. The client was a constant part of the design process and was passionately involved in its interpretation on-site. The artwork for the house was conceptualized and commissioned by the project architect who being part of the design team, continued the philosophies into it. The material vocabulary infused with the design ideologies became emblematic of the past and tied together to age gracefully into the future.

Thu Dec 29 , 2022
City way of living has made peoples existence hectic and most like to dwell in smaller areas but dwelling in a compact place becomes claustrophobic producing the dweller unpleasant and stressed, owing to lack of storage and room. Just for the reason that you only have a single place does […]