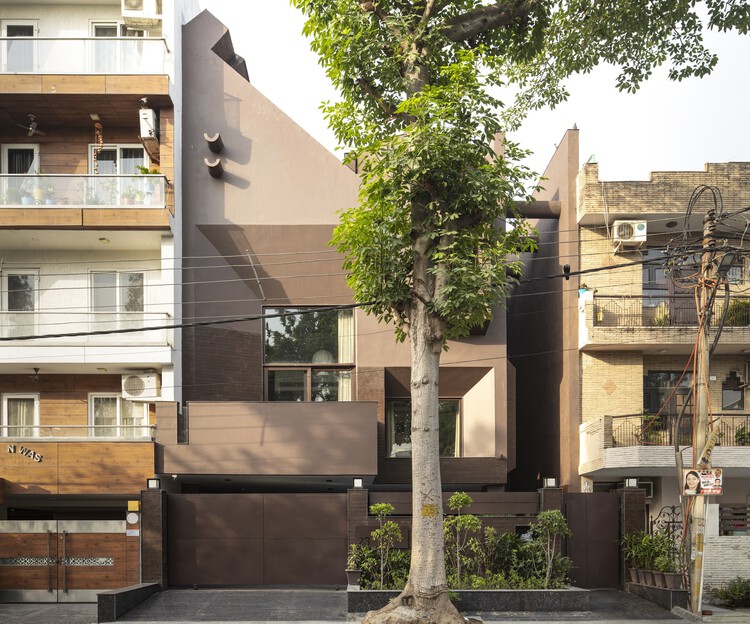 Casa Brut thrives on defining a new-fangled identity of its own merit. A rare and unapologetic hybrid between a stark architectural expression and a rooted Indian sentiment. Tucked into a quaint neighborhood in New Delhi, this private residence makes a compelling case for a robust design language, unafraid to pose as an anomaly within the typical streetscapes of the capital. Grounded austerity is the home’s most coveted asset, each element integral to its overarching vision and experience. Unabashed and steadfastly focused on the design intent, Casa Brut displays a palpable blend amidst Brutalist design while paying homage to Indian nuances with grace. This essentially conjures an architectural creation emblematic of the colliding of worlds while staying tethered to the concept of mindful building practices.

Luring one to discern its form and structure from the outset, the façade of the residence is the primary rendezvous with its persona. The elevation displays a fervent inclination towards Corbusian influences, a tactile matrix of many geometric counterparts. Composed of extruded segments, culled-out glazed pockets, sweeping linear profiles, and sculpted spaces within, the monolithic façade bathed in burnt sienna tones and exposed brickwork celebrates its incongruency within its context with candor. Moreover, the design intervention at an extrinsic level creates colossal internal volumes, galleries of natural light, and framed vignettes of the outdoor landscape on the inside.

Envisioned for a nuclear family, the four-leveled dwelling remains cohesively swathed in a native material palette that echoes Brutalist inspiration while staying cognizant of New Delhi’s extreme climatic profile the site experiences. The spaces are envisaged as a canvas of grey concrete, finishes in taupe, brickwork, speckled granite, and slivers of antique brass. Seeking its inspiration in the age of ‘Béton brut’, the residence projects its enduring aspiration of displaying purity of materiality and programmatic function that steers clear of frivolity. Tipping its hat to the family’s cauldron of shared cultures, this home surges with warmth in generous doses. Composed of myriad communal spaces and five bedrooms, a pared-down sensibility weaves the residence together while acquainting one with subtle reminders of Brutalist design. Immersed in a collage of umber and grey tones, the interiors elude superfluous ornamentation, making the materials used and the scale of spaces the frontrunners.

With simplicity as its drive, the otherwise imposing architectural form is laced with a linear geometry, crisp silhouettes, and lofty apertures that soften the thresholds between the inside and outside. The substantial interplay of volumes within the home is synonymous with Casa Brut’s persona. Scaling single, double, and triple-height volumes, one’s sight remains captivated by the shift in spatial milieus and the choreography of changing light inside. Posing as the nucleus of the blueprint, the communal zones are the flag-bearers of the homogeneous design identity percolating through the dwelling. Nestled in a sea of monotones, the room’s backdrop is dominated by a dynamic staircase cast in concrete which sculpturally slices through the height of the space. A grid of deep brown bricks traverses the towering wall, creating a visual dominated by geometry and a tryst with the leitmotif hue—akin to a fine slab of sumptuous dark chocolate if you will!

Finer details such as the circular concrete wall sconces, the molded granite staircase handrail, and the monochrome pendant lights lend the area a stoic yet curated aura. Crafted furniture within the home assumes clean-lined silhouettes reminiscent of modern design and the prowess of Le Corbusier imagined in wood and neutrals. Glimpses of verdant greens trickle indoors through the tactically positioned fenestrations, illuminating, and ventilating all parts of the home over the day’s expanse. Eternizing the modus operandi of Brutalist-Minimalism, this home additionally dwells on the energy grid while being operationally self-sufficient and abiding by building codes. With an assemblage of solar panels, Casa Brut’s functional requirements are primarily addressed by the renewable energy it harnesses and the climatically attuned design it embodies.

Although a unified whole, Casa Brutis a summation of a multitude of design intricacies that have been garbed in acute simplicity. With its intentionally unadorned and indigenous material profile, this residence presents itself as a beacon of Indian craftsmanship. Reviving the quiet splendor of Brutalism, Casa Brut nods to the timelessness of responsive architecture that can bear an introverted design scheme yet remain in an ongoing conversation with its context.

The death of the sitting room, and other design trends you'll see in 2023

Sun Jan 8 , 2023
Region Life’s interiors pro Giles Kime has invested three many years residing and respiration the globe of style and design. Here is what he foresees coming up coming. The demise of the sitting home When was the final time you had been entertained by somebody in their sitting home? Or […] 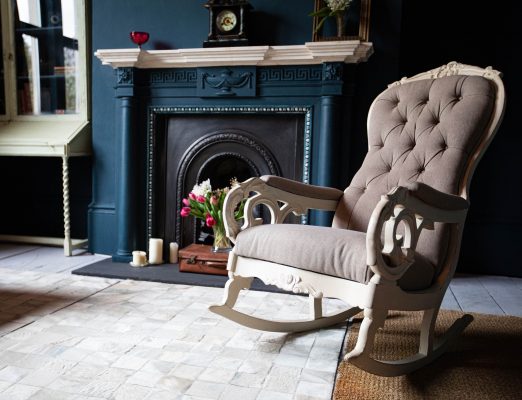