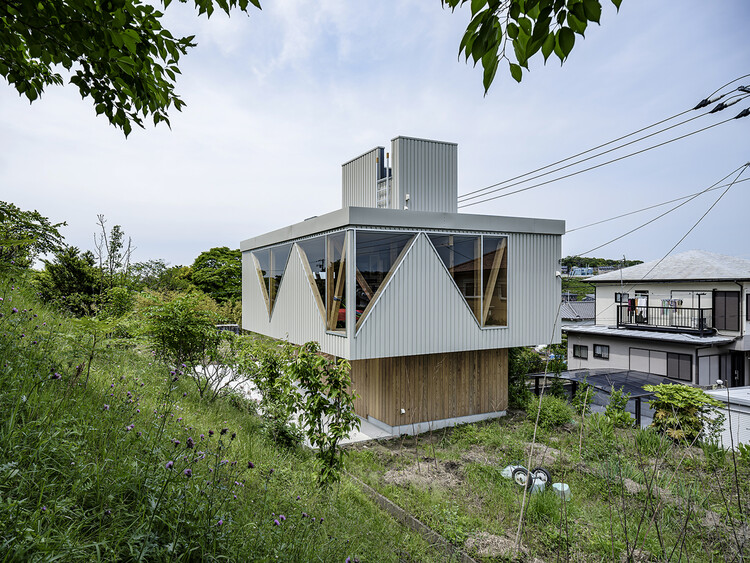 Text description provided by the architects. We planned a weekend house for an elderly couple on a site with a steep slope which was the edge of a suburban detached housing complex in Kisaradu Chiba Japan. The first time we visited, there were lots of flowers and plants which had been grown already. Also, lots of trees had been leafy green. The space had a rich nature which is rarely seen in such an old suburban residential area. The owner has been gardening and picnicking with fire every once a week for a decade with a wish to build a weekend house someday. They have been hoping that have the lifestyle of having a calm weekend by eating fresh vegetables from the garden, spending some time in front of the fire, and just sleeping before stepping back from busy Tokyo

The plan had started from the demand “Wishing to design the beautiful house” of the owner who had had the hope to enter the carriage of the architectural department when he was a teenager. Then we tried the designing process by giving lectures on architecture as history, styles, or some others to the owner and finding the plan for the beautiful house for them in such a mutual way. So we found three important concepts for designing the house: a unique proportion that couldn’t be seen in normal houses, the views to the outside, and the minimum footprints that prevent killing the plants. Also, the owner needed the walls to put the artworks he has and he wanted his sons willingly visit the house for family gatherings. It was limited to the site where it was available for putting the house, avoiding trees and plants. We thought that it was the best way to maximize the floor area, making the first floor smaller and cantilevering the second floor. Putting together the water equipment spaces on the compact first floor and placing the living room on the second floor, creating a room with enough space with a good view of the greener slope they made. And we planned the rooftop space because there was a possibility to view the scenery of Tokyo bay.

Unfortunately, the plane suffered a situation called wood-shock which was caused by the COVID-19 pandemic. On the other hand, we know from the situation of the local forestry that there are some problems such as spreading disease and neglected destroyed trees by a huge typhoon in 2019. There are lots of cut trees with no plan for distribution to the market. Then we decided to try using these trees for building the house. The process was, first the forestry union cut the trees, second, we brought them to the cutter for cutting and drying, third brought cut lumbers to the factory for pre-cutting, and finally built the house at the construction site. So, it was thought difficult and complex for the constructor who had been used to the way to build the houses by cheap imported lumbers or lumbers distributed at the market. But it was rather easy to use the local trees to build the house. Replacing the laminated wood with rare wood as big beams, made the atmosphere rich, and also using those woods as exterior paneling made the outfit special.

Though the cantilevered second floor made by a wooden structure was very difficult to plan. The structural architect answered as thick lumber trusses made the slope side open and rigid, and the other side was made with structural veneers for strength. Putting the glasses to the triangles made by trusses, made views from the interior unique. These trusses are shown in the interior, but they are used as the selves for the kitchen or hanging the hammock. Most interior finishes are shown the foundations barely by the strict limitation of the budget. Then these materials made the space gray and wooden, the slab of the foundation, plaster boards, structural fiber boards, and structural veneers.

The first-floor exterior wall is wooden panels, and the second-floor is galvanized panels for easy maintenance by the elderly owner in the future. It is gradually making the distance from the rich nature which was dreamed in the garden cities, succeeding generation to generation makes land lots split smaller by smaller, cutting trees of the garden as a bald concrete covered carport. It is very rich and luxurious having time spent with a small fire and breeze smells of soil and grass. If so, we could propose the example of having your base in the commutable suburbs as a “spending suburb” instead of luxury resorts that you visit once a year.

Bathroom Ideas to Modernize Your Space

Fri Jan 13 , 2023
This report will give you with some effortless and creative concepts to assist modernize your bathroom. No matter whether you are on the lookout for a complete rework or just want to spruce up the seem of your current place, we have some thing for everyone. From new fixtures and […] 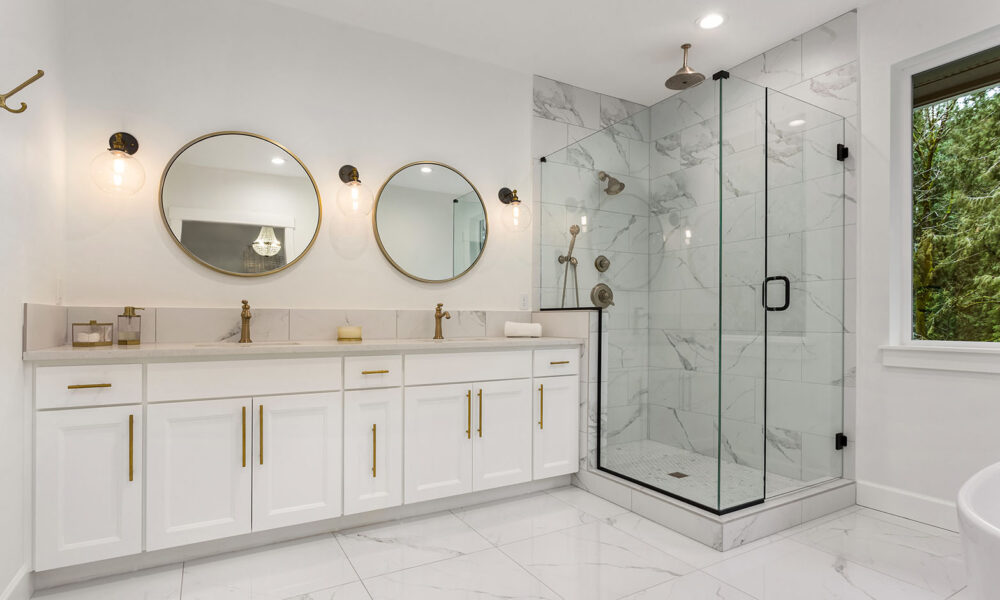