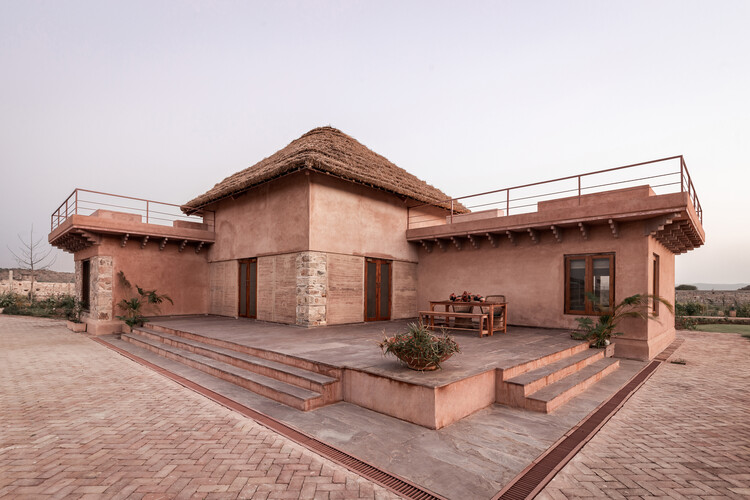 Text description provided by the architects. The structure is a home sitting in the center of a 4-acre permaculture-inspired farm. This house has two facades with entry doors facing both south and north. Alwar experiences extreme climates hence spaces in the North are more frequently used during the summer and the south patio becomes a sunbathing spot after winter set in. This house has two independent terraces. The stairs for both these roofs are playful and inspired by the step-wells of Rajasthan. The pyramidical roof is made of thatch. Locally procured tall wild grasses are used to tie the roof. This roof building is a traditional technique that helps in maintaining comfortable temperatures throughout the year. Walls are made on rammed earth using mud from the site mixed with natural binders like lime & fenugreek seeds. Edibles like jaggery and a popular Indian medicinal leaf, Neem, were also added to the mix which acts as natural insect repellents.

Apart from mud reclaimed stone has been used for the construction of walls and foundations. We used no cement to build this structure to reduce the carbon footprint for construction. The mortar used for stone masonry was Bagra. Bagra is waste that is left behind in lime kilns after processing limestone. The sustainable technique of building with lime waste has been used by nearby villages for centuries. Bedrooms face east and west with windows located strategically to get the best of sun rise and sun set views from indoors. The house is a load-bearing structure, we used stone brackets to pull out cantilevers to get a bigger terrace and protect windows from the rains. Stone brackets are like adornments and add beautiful detail to the building.

Entering into the central living room also houses a kitchenette, this is a double-height hall bringing a more expansive feel. The room overlooks all four sides of the farm bringing in lovely green views. A cluster of locally made cane lamps hang from the ceiling and act as a focal point for anyone entering into the living room. The design of the entire house and its elements are focussed on using local materials and craftsmanship. A daybed in the living room is also an example of the same. Traditionally called khaat, was picked from local artisans who have been making these for generations. Both bedrooms have multiple windows overlooking views from around the farm. The walls in both rooms have different dominant finishes.

One of the rooms which are built in earthbag has been finished in lime plaster. The brick powder was mixed with lime to get the rust tinge on the walls. This plastering technique is kept alive only by a handful of artisans. Multiple layers were plastered and beaten to remove air pockets thus avoiding cracks. The other bedroom is primarily built using reclaimed stones that were picked up from nearby dismantled sites. Decor elements and soft furnishings were introduced into the space after careful consideration. Choosing brands that work to promote crafts and use sustainable materials. The tones of the chosen accessories accentuate the colors of the building.

Throughout the building process, we tried to focus on local artisanal building techniques and materials in the same form they were used hundreds of years ago. Much research and talking to elderly masons have helped gain all the knowledge which has helped build this house. It is our effort towards bringing architecture closer to Earth through its materials and sustainable lifestyle.

Sat Oct 1 , 2022
South Eastern Regional Faculty is giving a probability to hone your backyard style expertise… MOST gardeners are yard designers, whether they realise it or not. Deciding upon in which to place a particular container or determining which two vegetation operate properly collectively is part of a course of action that […] 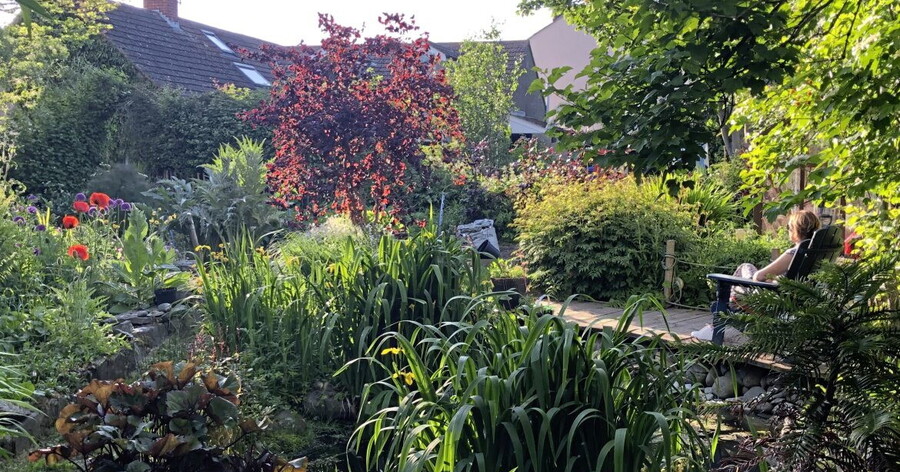